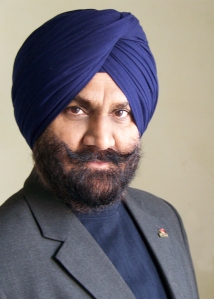 For the last 40 years, I have been active as a freelance Artist. Born in India; I developed an interest in art in childhood.

After having a successful career in India I emigrated to Canada In 2000.We now make our home in Surrey, BC.

I had a solo show “Jarnail Singh –Discovering the Soul of Punjab” at Surrey Art Gallery in 2004. I was featured artist at Harrison Arts Festival 2005 at Harrison Hot Springs. My work was in the exhibitions “From Across the Oceans” at Langley Museum, Punjabi Visions, at Reach Gallery and Museum, Abbotsford, From The Land of Five Rivers, Surrey Art Gallery. I had three shows of Komagatamaru Stories, at Surrey, Abbotsford, and Delta.

My works have been in many solo and group shows.My paintings have won many awards and they are in important private and public collections all over the world.

In 2008 the City of Surrey conferred on me a lifetime achievement award recognizing me as a Surrey Civic Treasure.

Painting for me is a process of infinite happiness and joy. It is impossible to describe and define this process. There is a mixture of feelings, imagination, craft, and many more elements that cannot be defined nor explained. Painting for me is meditation. Painting for me is prayer. I paint whatever inspires me, touches me. It can be a tiny flower, it can be an awe-inspiring mountain or a rivulet, a face in a crowd that touches me with its beauty and innocence, can be a story of ancient times, they are all part of my paintings.Many a time people ask me, what do you paint, and I reply, I paint everything, people, portraits, landscapes, anything that touches me, inspires me. Painting is my own interpretation of these.

For the last 40 years working as a professional freelance artist in the field of Art, Painting, Illustration, Designing, Photography and Art Journalism.

Arts Council of Surrey BC Canada

From The Land of Five Rivers, SurreyArtGallery. April-June 2011

6 Articles on “Punjab Museums” in the Ajit Daily, Punjab India

Participated in International and National photography workshops and conventions.

Photos published in the Indian Express, The Tribune Group, and major Indo-Canadian and Indian publications all over the world.

Artist of the Year Award by Indo-Canadian Cultural Association, Canada, 1998

Award of Honor by Central Association of Punjabi Writers of North America, 1995

Biography in school textbooks of Punjab School Education Board Punjab India and Bachelor of Arts Curriculum of Punjabi for Punjab University Chandigarh India.